Reforestation Drones Can Plant 100K Trees In An Hour 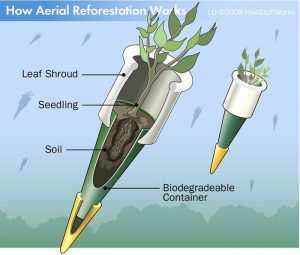 Sure, it’ll be great when a drone can drop off your Amazon Prime goodies or 7-Eleven snacks just minutes after you order them… but it’ll be even better when they help regrow millions of trees.

That’s what U.K.-based BioCarbon Engineering has set out to do. The company has been developing a high-tech system that uses drones to replant deforested areas — even in areas where planting wouldn’t be feasible using older methods.

BioCarbon’s system utilizes drones for two separate stages of the process. First, they’re sent into the target area to create a detailed, three-dimensional map. Once they’ve completed that step, the planting drones return to the site to do their thing.

They move with GPS-guided precision and they’re incredibly efficient. BioCarbon says that its drones can plant a tree in less than a second, or upwards of 100,000 trees in a single day. How? By firing a sort of agri-bullet into the ground.

Each drone can carry a load of biodegradable seed pods. Because diversity is key to a sustainable, healthy forest, BioCarbon’s drones can plant multiple species at the same time. They can also plant them in a highly-optimized arrangement, thanks to the advanced scouting work by the mapping drones.

Ultimately, BioCarbon Engineering wants to have 150 fleets of 6 drones each up and running. With a fleet that size, they say they’d be capable of planting tens of billions of trees per year… and they’ll do it at a fraction of the cost of traditional planting.

CEO Dr. Lauren Fletcher has set a lofty goal for his company. He wants to plant half a trillion trees in the next three decades. You’ve got to like his odds when BioCarbon Engineering drones can do the job ten times faster than people, for 85% less money, and in places where it wouldn’t even have been practical to send people in the first place.